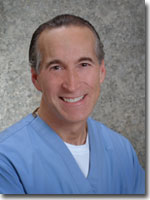 Dr. Eads has extensive training and experience in minimally invasive (laparoscopic and hysteroscopic) surgery. He trained with Dr. Kurt Semm in 1986. Dr. Semm was a pioneer in operative laparoscopy and invented many of the instruments used today. He trained in lasers with Dr. Joseph Feste at the Baylor College of Medicine in Houston. He has continued to adopt the newest surgical procedures and has performed over 3000 laparoscopies. He is fully certified on the da Vinci® robot. This $1.7 millon machine at Memorial Hermann Hospital and at St. Luke's The Woodlands Hospital allows many more safe advanced laparoscopic procedures. Even though this is called a robot, it is entirely controlled by Dr. Eads. He is a Master Proctor for the da Vinci® surgical robot and travels throughout Texas, New Mexico, Louisiana, Georgia and Florida teaching this revolutionary technique to other doctors. He is one of only 25 surgeons nationally to hold this distinction. He is the head of the Southwestern Gynecologic Epicenter for da Vinci surgery.

He has over 25 years of experience in pelvic reconstructive surgery, including the newest meshes and techniques. This includes training at Georgetown University in Virginia. These techniques have revolutionized the treatment of pelvic prolapse and urinary incontinence for long term success.

Dr. Eads was certified by the American Board of Obstetricians and Gynecologists in 1986 and underwent voluntary recertification in 2006. He is credentialed as a Menopause Practitioner by the North American Menopause Society (NAMS). He is the only physician in the Woodlands area and one of a small percent of all gynecologists nationally to have this credential.

He has served as department chairman and held several positions on hospital executive committees. He recently finished 11 years as head of a hospital quality assurance committee.

He was recently honored by being named to the Top Obstetricians And Gynecologists by The Consumers' Research Council of America. This group is based in Washington, DC and researches a physician's credentials and surgical cases.

On a personal note, Dr. Eads has been married for 28 years. He has a son who is in graduate school and a daughter who is a registered nurse working at Duke University Hospital. She received her RN from UTMB in Galveston. He enjoys outdoor activities and physical fitness regimens.

This is where you can feature something special about the practice, highlight a new service, link to a news article, etc.

It's up to you. You can then add a link, such as to the services page, for them to learn more about the featured item.